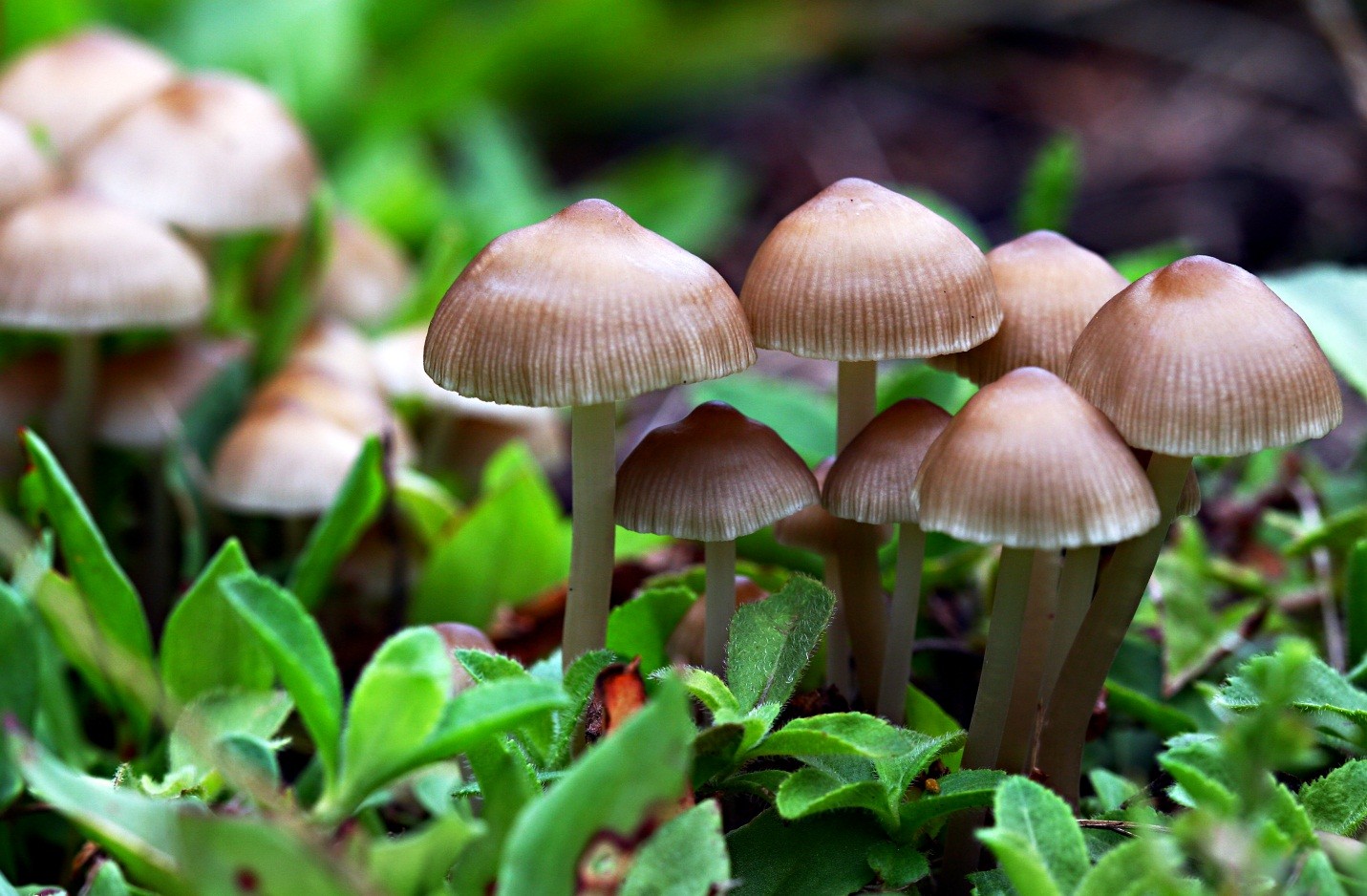 Mushrooms are one of the most interesting things found in the wild. There are countless species and variety of mushrooms that even experts could not tally all of the mushroom species in the world. That is just how diverse they are. In North America alone, there are 10,000 species of mushroom and a lot more are believed to be undiscovered. Just like humans, some of these mushrooms stand out because of their color and appearance just like the Bleeding Tooth Fungi. So here, we listed the ten most bizarre mushrooms everyone should take a look at. 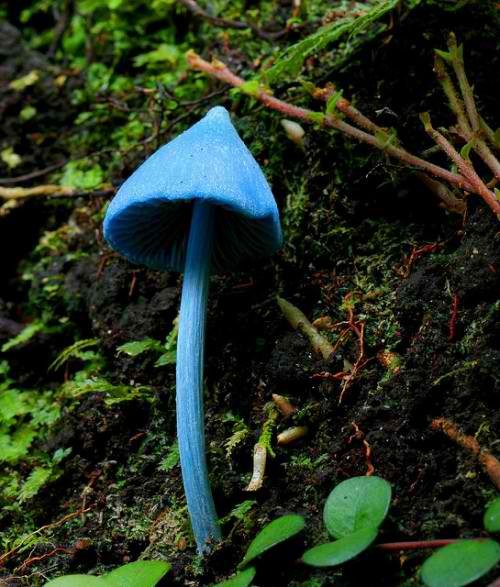 The Sky Blue mushroom or entoloma hochstetteri is a fungus that dwells on woodlands. They are found in the North and South Islands in New Zealand. Occasionally, they can also be found in India. Although, this mushroom looks very delicate and appealing, they could be very poisonous. However, it is yet to be verified. Still, a very eye candy mushroom, right? 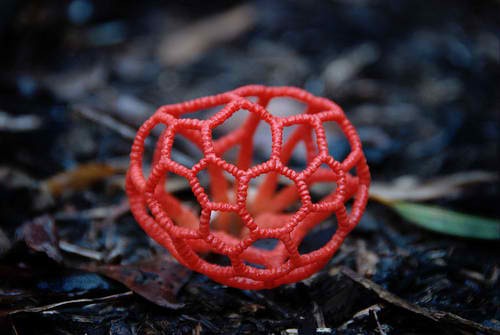 The Red Cage Fungus or Clathrus ruber was described as an alien that you would typically see on a sci-fi film. This fungus belongs to the family of Stinkhorns, which explains why it attracts a lot of flies. It stinks like hell, which puts off a lot of mushroom hunters. Aside from the bizarre appearance, this fungus would also come out from what looks like an egg. Do not dare asking if it is edible. 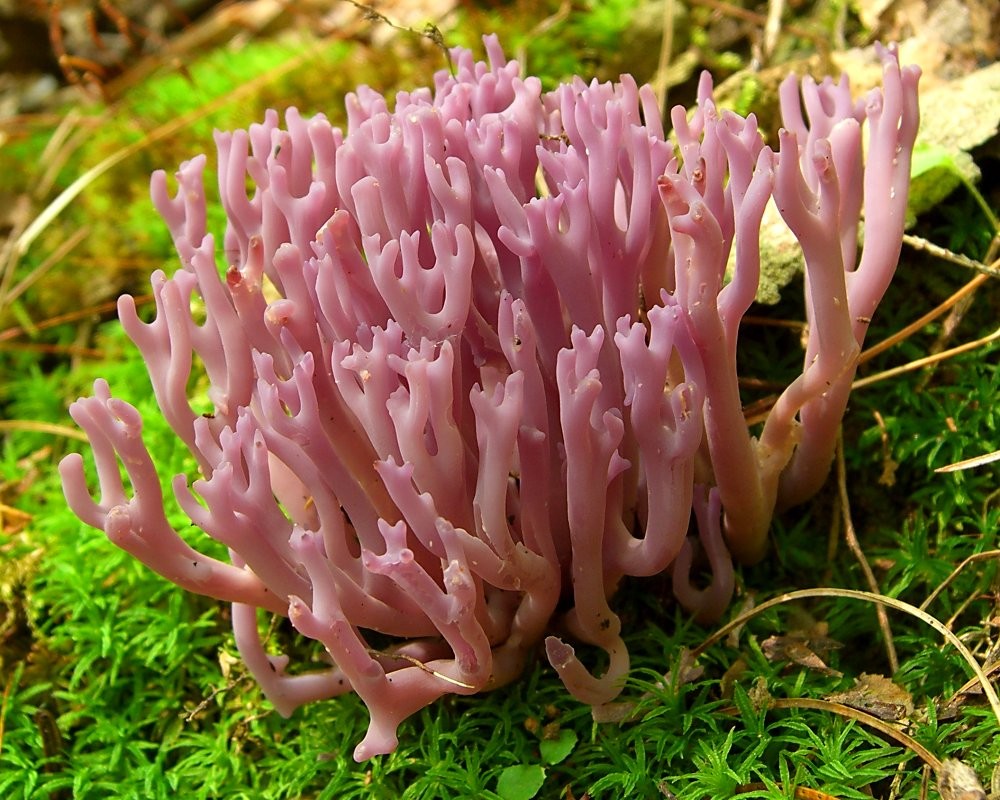 Coral Fungus came from the genus Claveria. And even though they looked like they fit at the bottom of the ocean, they would not survive on water. These fungi can be seen in a variety of colors ranging from all-white to rich orange and lilac. They are not considered as edible if anyone is interested to ask. Don’t you just want to stare at it? 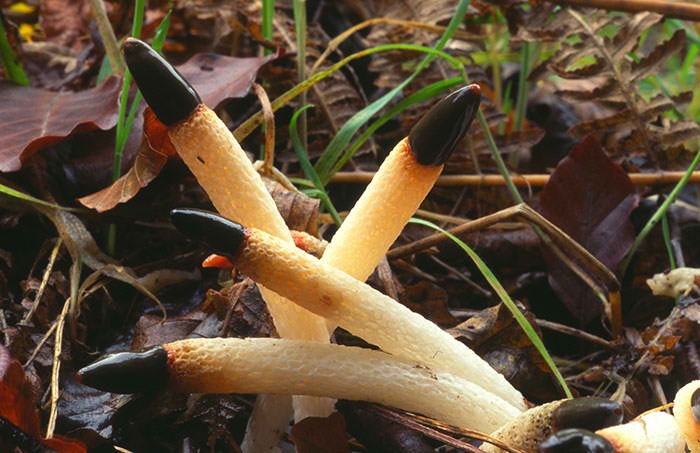 The Dog Stinkhorn has a Latin name of Mutinus caninus with Mutinus coming from the Roman deity of phallic and caninus meaning “like a dog’s”. This fungus has a dark somewhat pointy end that carried a lot of sticky pores that attracts insects. People also claim that this stinkhorn excretes a scent of a cat’s feces, which is actually weird. Why doesn’t it smell like a dog’s feces instead? What’s even weird is that they are edible and is served in some exotic locales in West Virginia. 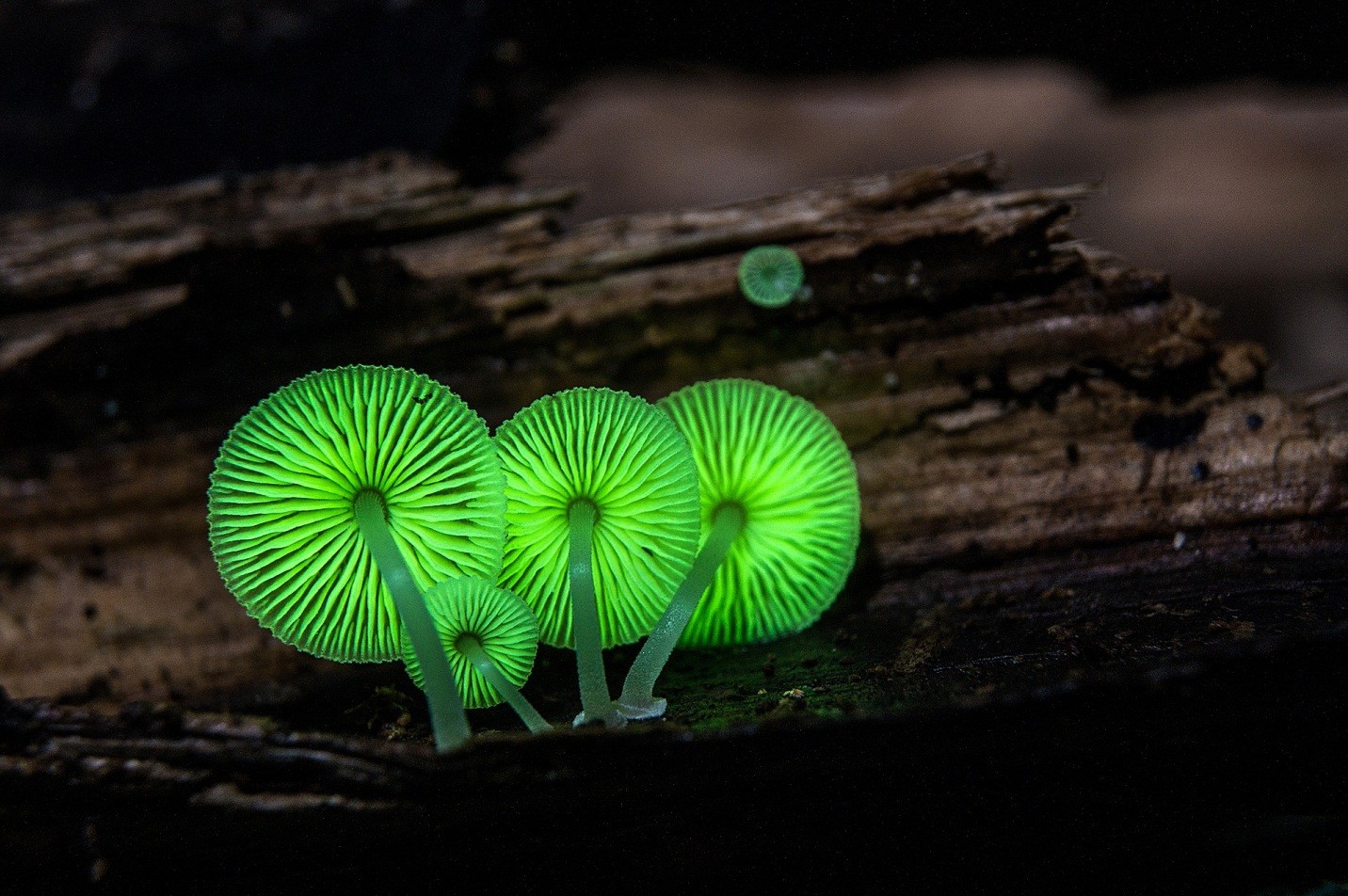 These adorable glow-in-the-dark looking fungi were only recently documented and now belong to the 71 mushroom species that glows in green. Mycena Chlorophos, their scientific name, were discovered in the 19th century when they were found in Bonin Islands in Japan. The bioluminescence of these fungi are said to be the result of a chemical reaction similar to fireflies. You think this would look nice in the garden? 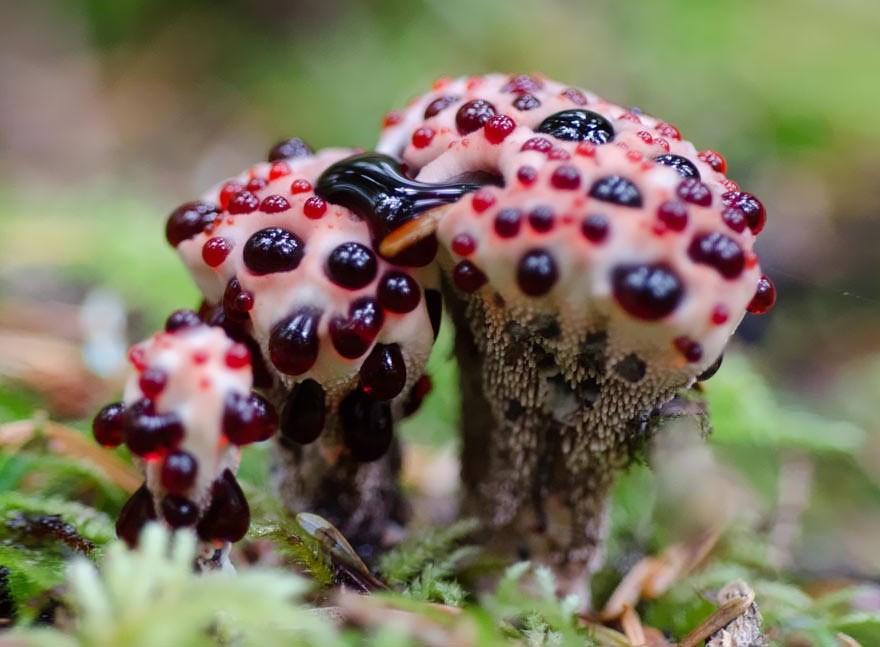 The Bleeding Tooth Fungus or Hydnellum peck is mostly found in central Europe and in the northwestern part of American Pacific. Recently, these fungi also made an appearance in Iran and Korea. It is very easy to notice these fungi due to their bright red liquid coming from its pores like a bleeding tooth. And although they are not poisonous, the Bleeding Tooth fungus can easily put off predators with their extremely bitter taste. Better to leave it as it is, then. 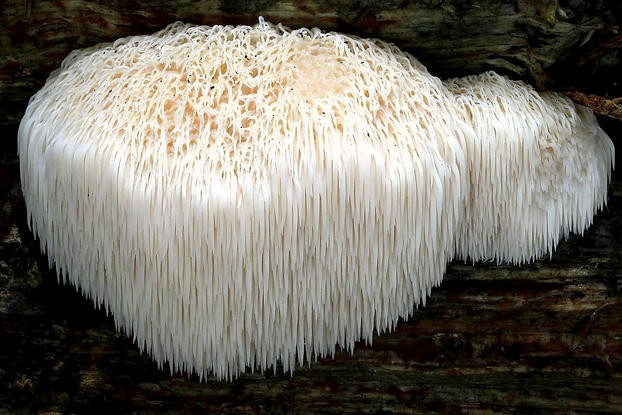 After a bleeding one, let’s now take a look at the Bearded Tooth mushroom. Doesn’t it look shaggy? These mushrooms grow in both dead and living trees. Aside from its appealing look, this mushroom is also very edible. In fact, they have been used in traditional Chinese medicine for centuries already. It is said that they Bearded Tooth mushrooms have anti-oxidant properties and can decrease high sugar levels in the body. 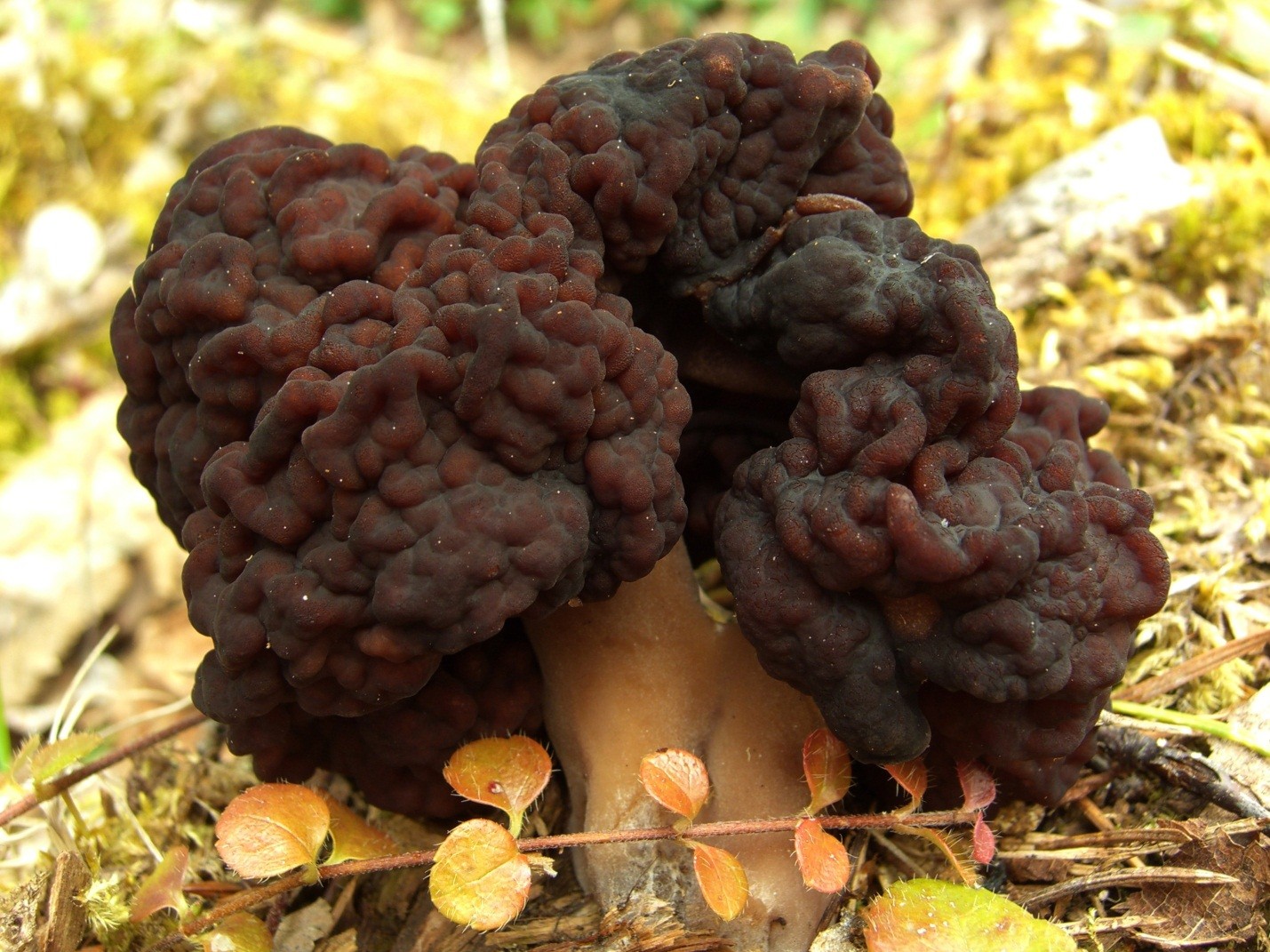 False Morel from the Gyromitra esculenta species displays a very odd brain-like appearance with its purple or brown color. They are found in North America as well as in southern Finland. Although they do not look gastronomically speaking, people claim that these mushrooms taste good wen prepared properly. Hence, they call it the Beefsteak Mushroom. But when mistakes are done while cooking these mushrooms, be ready to have your last meal. 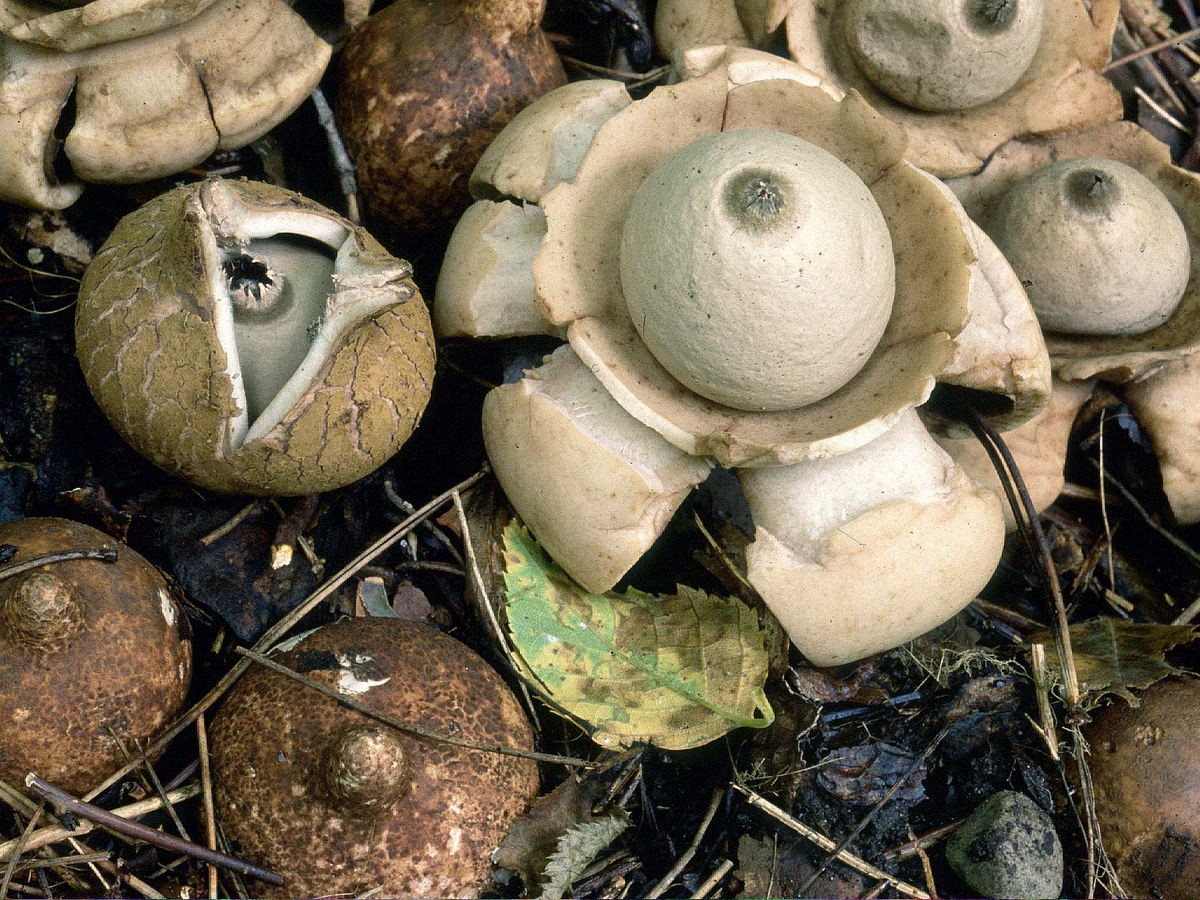 Earthstar or Gaestrum triplex is a species of puffball fungus, which are commonly found in a lot of locations in the world. This bizarre mushroom tends to change its appearance to allow for its fruiting body to pop allowing it to release spores. Native American tribes use these mushrooms for their medicinal properties and they were also omens to tell a potential celestial event. 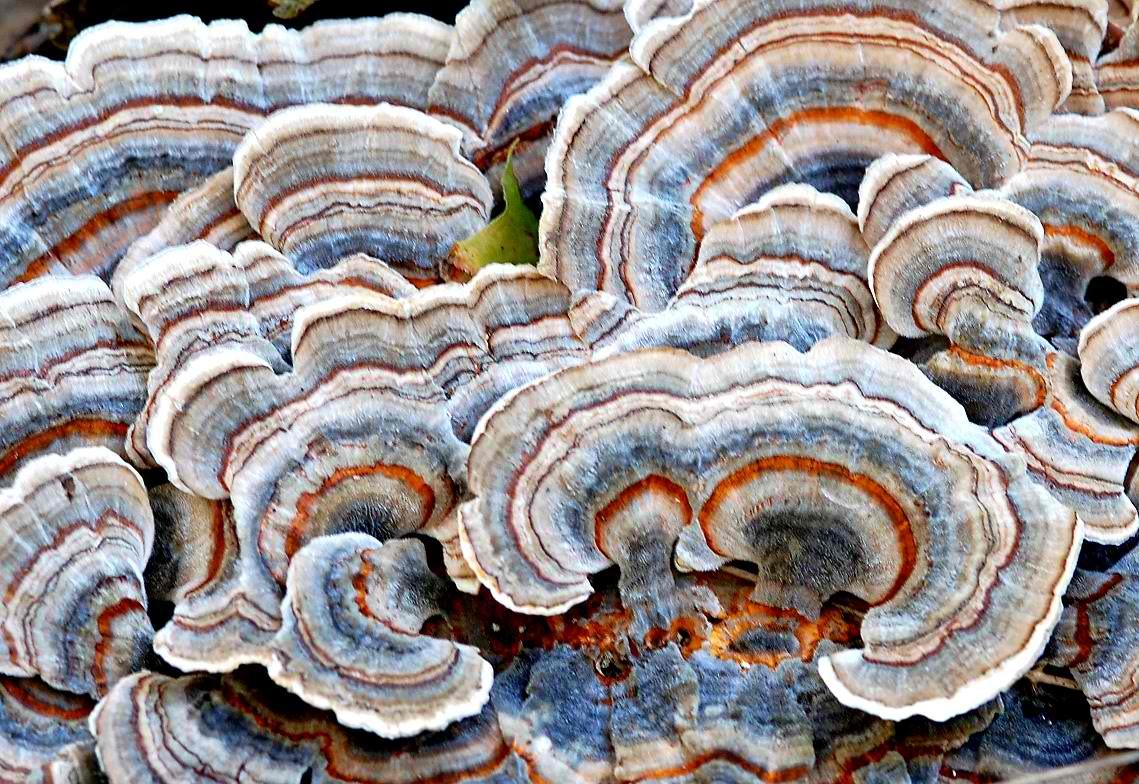 Turkey Tail mushrooms or trametes versicolor are probably one of the most common yet bizarre looking mushrooms that can be found worldwide. From its name this plant looks like a turkey’s tail. They often grow in dead trees and they have a wide variety of colors. Although used for Chinese medicinal formulas, a recent study suggest that these mushrooms include an immune system booster chemical which is not used in Japan to aid in cancer therapy.

Mushrooms are really fun especially in terms of their variety and oddity. There are still a lot more of them that no one knows about and they are just waiting to be discovered.